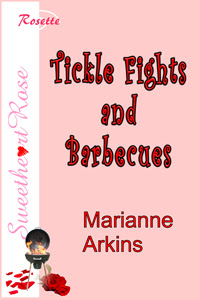 Since her return to her childhood home following the deaths of her parents, Tina Springfield has been alone, with nothing but her prize-winning roses for company. Though she longs for friendship and romance, her innate shyness and her awkward work schedule have kept her from meeting anyone -- including her new neighbors. But when a little boy's baseball threatens her rose bushes, everything changes, and Tina discovers that small sacrifices can make a big difference in life.

This charming short story is another winner for author Marianne Arkins. In just a few short pages, she creates a likable heroine who has a lot to learn and a handsome next-door neighbor who’s healing a broken heart. A cozy suburban setting, the warmth of summer, and the imagined scent of roses in the air draw the reader in at once. But the scene-stealer in this story has to be the hero’s young son, Kenny, who Arkins uses in a charming, believable manner to bring her two main characters together.

From the opening page, readers will admire Tina Springfield’s independence and resolve, though we sense before she does that perhaps there is more to life than nurturing her prize-winning roses and sleeping with earplugs. Her new neighbor, Dan Phillips, is the perfect hero: handsome, kind, and doing his best to raise a son by himself.

The character of Kenny is what makes this story work, however. When he makes his appearance, we fall hook, line, and sinker for this charming little boy whose baseballs land squarely in Tina’s garden…and make her rethink her decision to keep to herself.

What I enjoyed most about this story was its non-traditional hero and heroine. Tina and Dan have both loved and lost before, and neither one is anxious to jump back into a relationship. There’s also a child in the mix, which has the potential to complicate a budding romance. Arkins handle these dynamics quite well, however. All of the complications make Tina and Dan’s realization that love can be right next door all the sweeter.

Marianne Arkins has a knack for creating everyday heroes who work their way into your heart after just a few pages. I’m looking forward to this author’s first full-length novel, as the only disappointment I feel after reading her short stories is that they aren’t nearly long enough!
Posted by Marianne Arkins at 5:16 AM