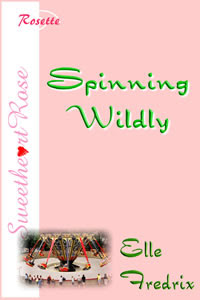 Although Megan Dempsey hates amusement parks, she hates disappointing her 12-year old son even more. So when his plans with a friend fall through, he ropes her into going along. Things go downhill from there. First, an incident with a mustard-oozing hotdog paints her breast golden. Then running into--literally--Mitchell Carter, a man who has stirred her emotions for more than year, mortifies her even more. When their paths repeatedly cross, she recognizes interest in Mitch's gaze. Megan's day is about to get a whole lot better!

Spinning Wildly by Elle Frederix is a quick and fun dash into an intriguing romance, a romance that is far less simple than it sounds.

Cosmic payback in the form of a blob of mustard has to be the most original description and conveys with it (who would have guessed) a wealth of emotion, that no matter how improbable it sounds, the reader will empathize with this main character. We've all been in Mrs.Dempsey's shoes at one time or another. This story wastes no time, but leaps from minor personal embarrassment right to the fantasy man, leaving poor Mrs. D filled with the desperate desire to suffer short term memory loss. This short story is frank and funny light and a definitely twisty storyline. Romance becomes as much a spinning vortex as ever one finds in an amusement park ride. Climb on for spin!
Posted by Marianne Arkins at 6:00 AM