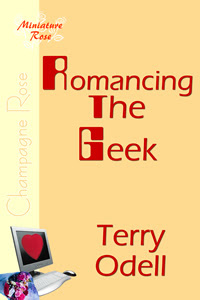 Romancing the Geek
by Terry Odell

Stephanie's lifelong dream is to design toys'sweet, cuddly toys. Instead, she's hired as a glorified typist. And not even with the rest of the marketing department, but way downstairs in the only available office, which she has to share with Brad, who's a total geek. A geek who's happy programming computer games full of explosions.

They agree to ignore each other while Stephanie waits for a desk to open upstairs. But when Brad has girlfriend troubles--like he can't get Lianne, the cocktail waitress to notice him--he swallows his pride and asks Stephanie if she'll teach him how to talk to women. She agrees, but he's having trouble passing her exams.

Romancing the Geek is a short story filled with desires and dreams.

Stephanie Brinks wasn’t where she wanted to be, sharing an office with a computer geek while trying to climb the corporate ladder. But, she knew if she bided her time someday she’d get to design the toys made by the company she worked for. In the meantime, she’d make the best of her situation in the office with Brad Hewitt, a computer geek designing new computer games.

Brad Hewitt was nonplussed to find himself sharing an office for six months with Stephanie. He wasn’t comfortable around women and became tongue-tied when expected to interact with them. But Stephanie was different. In her presence he was comfortable, to be himself and to talk to her. So he hatches a plan. He’ll have Stephanie tutor him in how to talk to women!

What follows is a flirty look at how a shy computer geek and a confident woman come together for one goal; getting Brad a date. The ending is sensual and fun, just the way the characters evolve. A cute read for those who always wondered if a computer geek can be passionate, and for those who know the answer!
Posted by Marianne Arkins at 8:11 AM