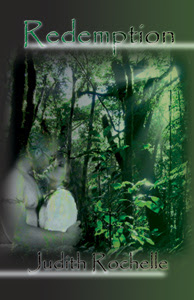 Lisa Mallory thought her life couldn't get worse. She survived the marriage in hell to Charles Mallory and her role as a suspect in his murder. After four years she's finally getting her life back on track when her eight-year-old son, Jamie, is kidnapped. Three months after the ransom is paid he still has not been returned, and the only resource left to her is Ethan Caine, a burned-out black ops warrior who has shut himself away from the world. Tracking Jamie to the wilds of Mexico's Quintana Roo jungle, as they make their pans to rescue the child they learn that no matter the past, life can still offer them a future.

The first thing to catch your eye is the cover. It definitely helps the reader get insight into the tone of the story as well as a hint as to what else is steamy in the jungle.

The story starts with a prologue that introduces our heroine, Lisa Taylor Mallory. What this short piece does is grip you from the moment Lisa says her final words to her dearly departed husband. From then on I needed to understand, "why?". There's a sense of great depths to her character.

My first introduction to Ethan Caine led me to believe Lisa's impression of him, that of a man past his prime and usefulness. Yet Lisa's brother, Josh, insisted she turn to Ethan for help in finding out what happened to her kidnapped son, Jaime. That decision intrigued me. It takes awhile to discover Ethan is also a character with a painful past. He's the kind of man romance readers love to see saved; the tortured hero. I was plagued with questions: What does Josh know? What could Ethan do that the FBI couldn't? And why? What damaged Ethan so bad that he is the way he is?

Like I said, Ethan is a mystery - will love be the key that solves it?

Redemption is an exciting, fast paced and engrossing story about two people with flaws and failings that should have beaten them down. Yet both are willing to do what it takes, like true survivors, to fight back. The impetus for the conflict is a mother's love for her missing child and is apparent from the get-go. You become aware, though, that there are two other love scenarios; the sneak attack and the one denied. It's up to you, the reader, to figure out who gets which kind.

Suffice to say the interaction between Ethan and Lisa is highly charged, emotional with sensual overtones and yet is well defined as they learn to trust each other with their lives and eventually, like all good romance stories, with their hearts. But before that happens they have to travel to Mexico where the pivotal action takes the reader into both its seedy underbelly and treacherous exotic tropical jungles. Their hunting for clues and connections had me reading nonstop, never knowing what was going to happen next. Toward the end, I had a good suspicion about the bad guy, but the actual revelation as to the true scope of what Lisa and Ethan were up against was a delightful surprise. Well, I liked being surprised, but I bet Lisa could have gone without that bit of twist.

Judith Rochelle has written an intense read that will satisfy lovers of romantic suspense novels. The passion and pain, the hope and... yes, redemption are interwoven into a satisfying read. You'll find yourself rooting for Lisa to find her son, rooting for Ethan to win the battle against his inner demons and cheering when love opens their eyes.

Now, Ms. Rochelle--what is Josh's story? He is a great brother to Lisa, but I bet he's got his own secrets. I got the feeling that there's something brewing but only you know what it is. Will you share?

Can I take the suspense?