Review: Now That We've Found You

Thanks to our reviewer: Xeranthemum. 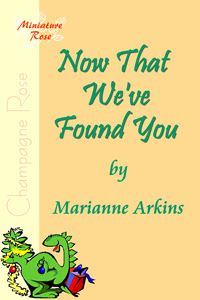 Now That We've Found You
by Marianne Arkins

For three years, the memory of Sarah Kirkman's dead husband has kept other men at bay. Her heart only has room for her six-year-old daughter, Melinda. On a vacation to the Smithsonian, the Kirkmans run into Doctor Duncan MacPherson, a paleontologist who befriends her dinosaur-obsessed daughter. Sarah's attraction to Duncan is undeniable but pointless-- he must leave for his home in Scotland the very next morning.

But Sarah has forgotten one important thing: Christmas really is for miracles.

My very first impression of Now That We've Found You came from the cover art. I started smiling immediately, and my mood lifted with positive anticipation. Sometimes the message from a cover is a good indication of what you are about to experience, sometimes not. I'm thrilled to say that this particular cover delivers the right message to the reader.

In this story there is a delightful child, Melinda, who exhibits the single-minded enthusiasm that six year-olds possess when they latch onto something that excites them; in this case, paleontology. Marianne captures that focus perfectly. I could "see" Melinda's personality, especially when she voiced her understanding of herbivores. That had me cracking a smile. Melinda's acceptance of Dr. MacPherson flowed naturally and believably.

The angst of guilt that the heroine, Sarah, deals with because of her attraction to the handsome Scottish doctor is not burdensome to the story. The conflict is delivered in just the right amount for the reader to understand Sarah as a person. Her dilemmas and choices could be our own. I liked the fact that at all times, Marianne remembers that Sarah is foremost a mother and handles her first kiss with Duncan with that in mind. The restrained passion resonated in that scene. It was quite hot!

The hero, Duncan MacPherson, is a yummy Scottish paleontologist guest speaking at the museum. I enjoyed the fact that he was written as a very male, caring man with a healthy dose of humor and yet acted like a ... quiet alpha. He knew he wanted Sarah, pursued her with classy and determined maneuvers and didn't fight making a commitment or admitting what he felt, as some alphas are wont to do.

The characters were a delight to watch as they fell in love. At no point did I feel this romance needed to be fleshed out more. Marianne tugged and stroked all the major emotional heartstrings that make this a must read for all romance readers who want an HEA that makes them feel good all over.

Once you've read the sigh-inducing ending you'll realize Now That We've Found You delivers romance! I can attest to that.
Posted by Marianne Arkins at 6:12 AM