Review: Love of My Heart 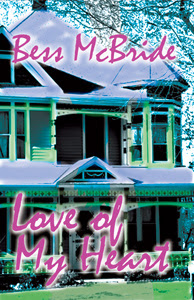 Love of My Heart
by Bess McBride

Aggie has done what no mental health therapist should do. She's fallen in love with her mysterious client, Bill. Aggie has recently purchased an old Victorian house on a hillside overlooking Commencement Bay in Tacoma, Washington; where she finds an old photograph of a Victorian era couple and a love letter written in 1885. The letter speaks of another love that can never be'that of Louise, the daughter of a wealthy English family, and her Irish lover, William. Heartbroken, Aggie soon begins to dream of the forbidden love between Louise and William, but in her dreams, William's face mirrors that of her beloved, Bill.Bill is in love with Aggie, and he can't figure out how to get close to her. If only he hadn't entered her professional doors as a client. How is he going to fix this?

Love of My Heart is a beautiful, romantic story with a mild supernatural bent. The two main human love interests are Aggie, a therapist who is attracted to her client and is torn between her needs as a woman and her profession's Code of Ethics, and Bill, who has secrets that he won't let out in therapy not the least of which is his own attraction to Aggie.

The secondary supernatural romantic plot centers on past lovers, Louise and William. Louise lived in the house that Aggie now owns and is instrumental in getting Aggie to listen to her heart by drawing Aggie into her dreams to re-live Louise's romance with William way back in the 1800's.

Due to the style of how the paragraphs of this book are presented, it was a bit jarring at times when it came to POV shifts or time shifts. If you can anticipate this style, then you will find it easier to enjoy the nuances of this romance story.

The author has a good handle on how it was to be a woman living at home back then; where daddy's word was law. Love was not enough to withstand the strictures of a prejudicial society and I was very frustrated and angry on Louise's behalf. Yet, I felt satisfied with the strengths she showed when she exercised the only options she was capable of for those times.

I found William O'Brien's love for Louise to be quite poignant and continued to be amazed at his steadfastness as I read the letters he wrote to Louise and in time, his old landlady. Best of all, was his yummy Irish brogue. I could well understand Louise's being attracted to a man with a sexy accent.

The best part of this story is that true love endures. The author gives the reader a HEA that ties up all the loose ends, even the supernatural. Interestingly enough, she wrote the course of Louise's and William's romance in a way that could mirror real life; decisions we make along the way affect our future in surprising ways.

I enjoyed reading about how a man and a woman from two diverse families, influenced and manipulated by the ghosts of the past, find love in the future. Ms. McBride has an incredible turn of mind.
Posted by Michele at 7:14 AM