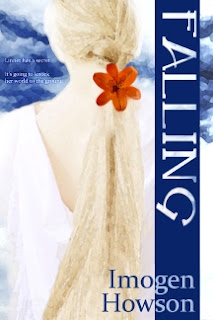 Linnet has a secret. It's going to knock her world to the ground.

Linnet has a secret that is tearing her apart. While her world falls apart around her, Linnet learns that it takes courage, and the grace of a new kind of friend, to learn that not all secrets are meant to be kept.

Falling by Imogen Howson is set in a distant future where there are those who are affluent enough to afford to live in tall towers above the clouds of pollution and toxins of the atmosphere. But, despite appearances, all is not perfect in the affluent world.

Linnete hides her secret well; she is a freak. Her mother's disapproval when she is without the wig that covers her hairless head makes Linnete fear that without her wigs, she is not lovable, or even likable. The reader's heart clenches at the harsh words Linnete’s mother utters to her daughter and the reader can’t help but wish a different future for this young woman so eager for her parents' acceptance.

Gecko never meant to spy on the young girl so different from the others of her class. Different not because of her hairless head, but because of the life that seems to glow within her. Gecko lives under all the pollution that blocks the ground from the sky, but he is able to reach their heights by climbing and even gliding on a pair of man made wings. He relishes the times he is able to spend with Linnete, even risking his life to do so because the people in her world would do anything, even kill, to keep those from below from invading their rarified world of privilege.

Natural forces are at work that may destroy Linnete’s world and even those within it, for the towers are not as safe as they are told. Now Linnete must decide whether to stay in the world she has known her whole life and risk death, or travel with Gecko to his life under the clouds of smog and find a home where she is viewed as normal and not a freak.

I adored this story. It was a modern retelling of the fable Rapunzel; where a young girl must escape the preconceptions of her life to find true happiness. This story was a fantastic read. I look forward to more stories from Imogen Howson with relish.
Posted by Marianne Arkins at 6:10 AM