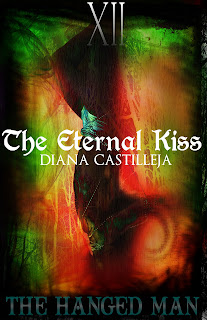 The Enternal Kiss
by Diana Castilleja

Diego Viteri has lived for centuries, suffering a growing loneliness that is becoming impossible to ignore. His only reason for not ending his life is to see justice served to his creator and then, Diego can rest.

Meeting Titania, his needs reshape into something he can't ignore. Before he realizes what he has done, he bonds with her and sets into motion the very thing he swore he would never do to another person. He has shared his curse. And there is only one choice to be made to try to save her.

Titania Alcott is a singer with a gift. Not just a gift for making music, though she certainly has that, but a gift of empathy. She has the power to "read emotion by absorbing it as well as broadcast her own." Over the course of time, she has learned to protect herself from this power and use it for good.

The concert had been draining, but so many people had needed it. Like the couple in the third row working on saving their marriage, or the woman who had walked away from her boyfriend, crying nearly throughout the concert, confused and burdened. There had been the couple to her right who had traveled to see her. She’d seen them at several concerts, and she recognized them almost immediately. They gave her faith and belief in love. They came in love and left the same way.

When she feels an overpowering hate emanating from an individual at one of her concerts, therefore, she knows she has to try to reach him... to try to protect the person his hate is focused on, Diego Viteri. Her attempt to save him from the evil that follows him sets in motion a novel filled with excitement, intrigue, love, and a scorching romance.

From her first contact with Diego, a vampire unlike any you may have met, Titania is intrigued and mesmerized, and so is the reader. This is a couple destined to be together and it is hard to turn away from them to return to the real world. I had to force myself to close the pages so I could do the waiting edits on my own work!

Diego is the ideal vampire.... the vampire with a soul. He hates his life and has sworn to never subject anyone else to it. However, when he tries to save Titania after a crazed fan severely beats her, he discovers he has set in process the one thing he never wanted to do. Ms. Castilleja weaves in vampire myth and legend with a light touch, denying some and discovering new.

The Eternal Kiss is the first in the Shadowed Souls series by Diana Castilleja and this reader is anxiously waiting for the next installment. When you start this, make sure you have plenty of time. You will not want to put it down until you find out what happens to this magical couple and their friends. The heat between Diego and Titania grows with each page and is definitely sizzling, without being gratuitous. Suspense will keep you figuratively turning the next page. I can unreservedly recommend this book whether you are a lover of the vampire genre or not.
Posted by Judy at 6:42 AM