Review: A Dragonfly in Amber 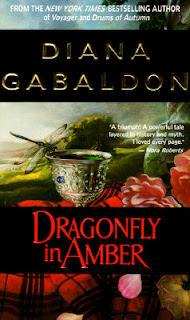 A Dragonfly in Amber
by Diana Gabaldon

With her now-classic novel Outlander, Diana Gabaldon introduced two unforgettable characters — Claire Randall and Jamie Fraser—delighting readers with a story of adventure and love that spanned two centuries. Now Gabaldon returns to that extraordinary time and place in this vivid, powerful follow-up to Outlander....

For twenty years Claire Randall has kept her secrets. But now she is returning with her grown daughter to Scotland’s majestic mist-shrouded hills. Here Claire plans to reveal a truth as stunning as the events that gave it birth: about the mystery of an ancient circle of standing stones ... about a love that transcends the boundaries of time ... and about James Fraser, a Scottish warrior whose gallantry once drew a young Claire from the security of her century to the dangers of his....

Now a legacy of blood and desire will test her beautiful copper-haired daughter, Brianna, as Claire’s spellbinding journey of self-discovery continues in the intrigue-ridden Paris court of Charles Stuart ... in a race to thwart a doomed Highlands uprising ... and in a desperate fight to save both the child and the man she loves....

The second book in the Outlander series, A Dragonfly in Amber picks up where the first one left off...sort of. Once I got my hands on this book, I eagerly sat down to read and find out what happened next to Claire and Jamie. What a jolt to find the story open in third person, from the point of view of a vague character briefly mentioned in the beginning of book one. Even more jolting is the date, 1968, and the fact that Claire, with a daughter she didn’t have before, is present at that time period. With fear and trepidation, I plugged on. After all, I had put my trust in this author once before and had not been disappointed.

Claire is some twenty years older, with an air of sadness and loss about her that can only lead to one conclusion. At some point, she journeyed back through the stones to her own time. The questions are instantly aroused: When? Why? What happened?

Several chapters into the story, we begin to find out. We’re back to Claire’s first person account, and it truly is another roller coaster ride. As with book one, it is full of adventure, perils, and the love that sustains the two main characters throughout their experiences. Some might think there would not be much of a romantic spark that could be portrayed between a married couple, but I beg to differ. The romance is there loud and clear, and made that much more meaningful because they are married and so much in love.

The tone of this book is a trifle different, for there’s a shadow of fear and sadness sitting over it. We know, to some extent, what’s going to happen since history and the first chapters of the book tell us the Highlanders failed and were massacred at the Battle of Culloden in 1746. But there is also a tinge of hope. Maybe not all is lost. Or is it? I guess you’ll just have to read it and find out.
Posted by Judy at 10:29 PM