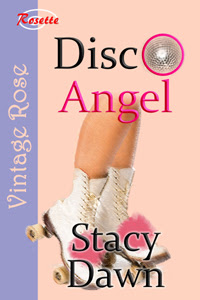 Bobby Hues has his eye on the Disco Angel jiving around Electric Nights Roller Disco. But what would Miss Spring Break 1976 and the foxiest chick he’d ever laid eyes on want with a lowly grease monkey like himself?

Summer Benton’s heart started racing the minute she rolled her broken down ride into Bobby’s garage. When he gets a gig working at her favorite hang out, she thinks she has it made—but the quiet hunk still isn’t talking. A little push on her part starts the wheels rolling—in the wrong direction. Now she has to figure out how to lose the wrong guy, and convince the right one she digs him enough to be his Disco Angel, forever.

Do you miss the seventies? Step back in time with Stacy Dawn and relive the days of disco, mirrored balls, Afros, and cheese weasels.

Ms. Dawn captures the feeling of the times with a cute story of two individuals who have a hard time getting together. Take a few minutes, get back to disco fever with Summer and Bobby, and find out how a soft-spoken man can finally tell the girl of his dreams how he feels.
Posted by Judy at 1:29 PM