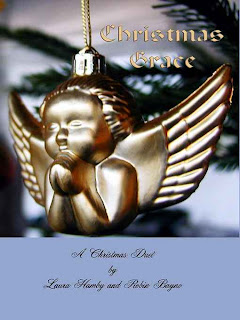 Hannah Kelsey, now orphaned by the War Between the States, awaits patiently for news of her lone, surviving brother. A life that has been anything but easy is made more complicated by the Yankee soldier she finds lying in front of her cabin a few days before the Christmas of 1864.

*The Scent of Falling Snow* by Robin Bayne

Aideen O'Conner felt a certain twinge when Rob Novak walked into her dance studio. Was it because she thought he didn't take her seriously, or because she was afraid he would? When Rob visits his daughter's step-dancing teacher, he makes it clear he doesn't consider the activity a challenge. The real challenge comes when he learns the teacher's secret.

This historical romance is set at the end of the Civil war. Hannah Kelsey finds herself alone, struggling with the deaths of her family, the destruction of her home and the disdain of the community. As an Irish southerner who despises slavery, she is a target for scorn, suspicion and the unwanted attention of her young, confederate neighbor. As she waits for the return of her brother, she finds a wounded, union soldier bleeding outside her home. Moved by compassion and Christian charity, she tends his wounds and hides him from harm.

I found this story to be gripping, quick paced and beautifully written. It captured my attention from the first sentence and held it to the very end. It was a wonderful story about the power of miracles and was unique in its presentation, not at all like the many seasonal stories out there. It had some unexpected twists and left me goose bumps. I highly recommend this to anyone!

This contemporary novella is a sweet story about mistakes made and forgiveness granted.

Aideen O’Connor had lost her marriage, custody of her daughter and her self-respect. Through circumstances of her own doing she had hurt the people she most cared about and was struggling to put the pieces of her life back together.

When Rob Novak’s daughter expressed an interest in Irish dance, he found himself surprised that his tomboy wanted to compete in something he considered a “non-sport.” He found himself drawn to Aideen and realized there was a deep hurt that she kept hidden. As he tried to unlock those secrets, he learned that love and forgiveness are the most powerful tools of all.

I found this short story to be a sweet tale of forgiveness and the importance of learning to forgive oneself. I liked that the main character, Aideen, had made mistakes and was working to mend the hurt and distrust she had caused. I found the private guilt she lived with to be a great catalyst for the message of leaving the past behind and moving forward. This is another great, unique Christmas story sure to uplift the reader.
Posted by Marianne Arkins at 5:56 AM