Review: Bride From the Black Lagoon

By guest reviewer: Alice Teh 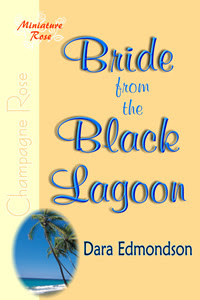 Bride From the Black Lagoon
by Dara Edmondson

Welcome to television's biggest new reality show -- Bride from the Black Lagoon. Contestant couple Kip and Jodi must overcome a series of challenges on a tropical island to prove they are meant to be together forever. But the show's producer and his assistant pull out all the stops to prevent them from winning the hundred thousand dollar grand prize. Will Kip and Jodi prevail? Will their relationship survive?

When I started reading Bride from the Black Lagoon, Dara Edmondson had me hooked from the beginning.

Jodi Bentley is a beautiful kindergarten teacher, and also a shopaholic. Her urge to splurge on branded items left her in a mountain of credit card debts, but still, she is unstoppable. Her fiance, Kip loves her very much but is troubled by her uncontrolled spending. He is still a struggling actor, trying to make it big. To overcome the debt problem, Jodi convinces Kip to take part in a reality show called "Bride from the Black Lagoon". Five weeks later, they are told they will be the first contestant couple.

The story develops on Black Lagoon Island where the show is filmed. Flown in via private plane, the couple meets with the charming producer, Evan Van Duran and Sky, his blonde bombshell of a production assistant. Jodi nicknames her The Plastic Barbie Doll. Little do they know, Van Duran has a hidden agenda and is using Sky to achieve his goal. Will Jodi and Kip win the prize money of one hundred thousand dollars? More importantly, will their love survive the test?

This was a great read. Thanks to Ms. Edmonson for a wonderful time!
Posted by Marianne Arkins at 6:17 AM