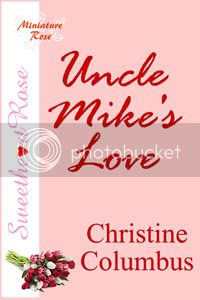 Mike felt the biggest mistake in his life was moving away from his hometown and not asking the first love of his life Patty to go with him. Now, twelve years later he's back in town to take care of his nephews and he's hoping to get a second chance with Patty.

This is a charming story which focuses on one man's realization that letting what someone else might think about the woman you are in love with is a sure way to lose that love. Will he be able to win Patty back now that he's back in town?

Ms. Columbus draws an entertaining picture of Mike trying to win back Patty, but I have to say I think the two young boys steal the show as they attempt to play "matchmaker" between Mike and Patty. "Uncle Mike's Love" is a lighthearted look at love, romance, and second chances.
Posted by Judy at 6:21 PM