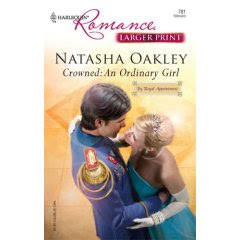 The Andovarian royal family is mourning the untimely death of the king. An urgent summons orders the return of the heir – His Serene Highness Crown Prince Sebastian II ….

Just as Seb had tasted normal life, he was forced to do his duty. Accepting the crown meant losing his most precious gift – the love of an ordinary girl.

Now, years on, Marianne Chambers is visiting Andovaria. Seb has been given the second chance he’s always longed for. But can he fight tradition and crown Marianne as his very own princess?

I've had this book in my TBR pile since February and have been hesitant to read it based on my previous bad luck with the line. Turns out waiting was a mistake. I really, really enjoyed this book.

From the moment I picked it up, I didn't want to put it back down again. I can't exactly say why -- it's not suspenseful or exciting. It was actually very quiet. But the characters were incredible and the book packed a serious emotional wallop that had me hooked from the get go.

My only complaint about this story was it wasn't long enough. If not bound by the restrictions of the line for which she was writing, Ms. Oakley could have written a book twice as long and just as interesting. I'm truly impressed by her ability, and plan on checking out her back list immediately.

Thanks, Ms. Oakley. You've restored my very shaky faith in the Harlequin Romance line.
Posted by Marianne Arkins at 6:26 PM